Changing your Mindset to break the Yo-Yo Diet Cycle 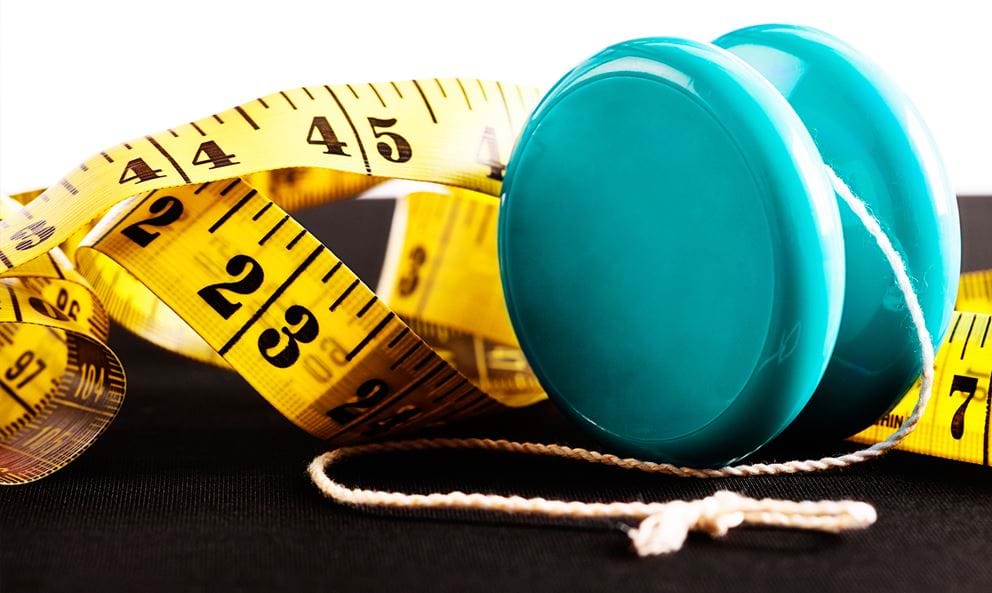 Ever heard of “yo-yo dieting”? It’s that unfortunate situation where you’ll get on a diet for a while, shed a good amount of weight, then regain it all later. Rinse and repeat.

It’s a pretty horrible deal all around. Not only is it bad for your health (according to a bunch of scientists1) for you to consistently lose and gain weight, it also makes long-term change impossible.

The problem’s so bad that, back in 2007, it caused UCLA researchers to boldly declare that “dieting does not work.”2

But is that right?

Are all dieters doomed to a world of failure and backsliding?

Nope. All you need to do to make dieting work is tweak your perspective and habits in some key areas. Here’s how.

Make your diet a lifestyle

The number one reason why yo-yo dieting happens is that dieters don’t treat dieting as a lifestyle change. Instead, they look at it as a short-term routine they’ll have to put up with for a while to get specific benefits down the road.

So, when you’re coming up with a diet, don’t think of it as a temporary thing that you’ll do until you see results.

Think of it as a permanent lifestyle shift you’re making. Choose and plan your diet accordingly.

Don’t be too hard on yourself

Following on from the last point, since you’re trying to create a new lifestyle for yourself, you’ve got to come up with something that you can stick to long-term and feel happy with.

Deciding to go on a crash-diet where you eat nothing but celery and misery is not sustainable. Sure, you’ll lose plenty of weight, but you’ll never stick to that routine long-term or make it part of your lifestyle going forward (and you definitely shouldn’t, either).

So, when you’re planning what kind of diet to follow, don’t be too hard on yourself. Make small, lasting changes, bit by bit

It’s a good idea to begin by excluding processed foods and refined sugar from your diet (maybe with occasional cheat meals here and there). Anyone can adapt over time to a new diet without table sugar, energy drinks, and microwave meals.

From there on you can start adding a few extra healthy foods to your pantry. Leafy greens, for example.

Add in pre-planned “cheats” to your diet

It’s hard to make a positive lifestyle change when you set yourself the standard of never making any exceptions to it, ever.

All that this hard-line approach usually means for most dieters is that one day they’ll come to a point where they do make an exception anyway, feel like failures, and give up on the whole diet altogether.

A far better strategy is to add in pre-planned “cheat” meals here and there. For example, you can set yourself a general rule that you’re allowed one slice of cake on someone’s birthday, popcorn and soda when you go to the cinema, or a slice or two of pizza when you’re hanging out with all your friends.

These cheat-meals will act as the safety valve to help you let off steam and stick to your diet over the course of day-to-day life.

Just make sure to decide in advance what cheat meals you’re allowed and when. If you “wing it”, you’ll likely end up making every second meal a cheat meal.

Pay attention to your gut microbiome (It really matters)

This is a massive topic by itself, but it’s important to understand that a huge part of how much you weigh is tied to what kind of microorganisms you’ve got in your gut.

In his book “The Diet Myth”, Tim Spector, Professor of Genetic Epidemiology at Kings College London, gives the example of identical twins with pretty-much identical diets and activity levels, but different gut microbiomes.

In some cases, one twin will be significantly heavier than the other, and the microbiome seems to be a key reason why.

To make sure your gut microbiome is healthy and that you have the best chance of keeping the weight off long-term, include plenty of prebiotic foods in your diet (foods which feed the bacteria). These include things like garlic, onions, Jerusalem artichoke and chicory root.

Be sure to include plenty of probiotic foods as well (foods which contain healthy bacteria). These include things like yoghurt, kefir, sauerkraut, and other fermented foods.

It’s important to keep in mind that when you switch to a diet rich in prebiotic and probiotic foods, you may feel ill for a while before feeling better. This is due to a medically-recognised phenomenon (often associated with antibiotic use) called the Jarisch-Herxheimer Reaction. This is where dying, harmful bacteria in your body release toxins which cause inflammation.3