Couples who train together, stay together 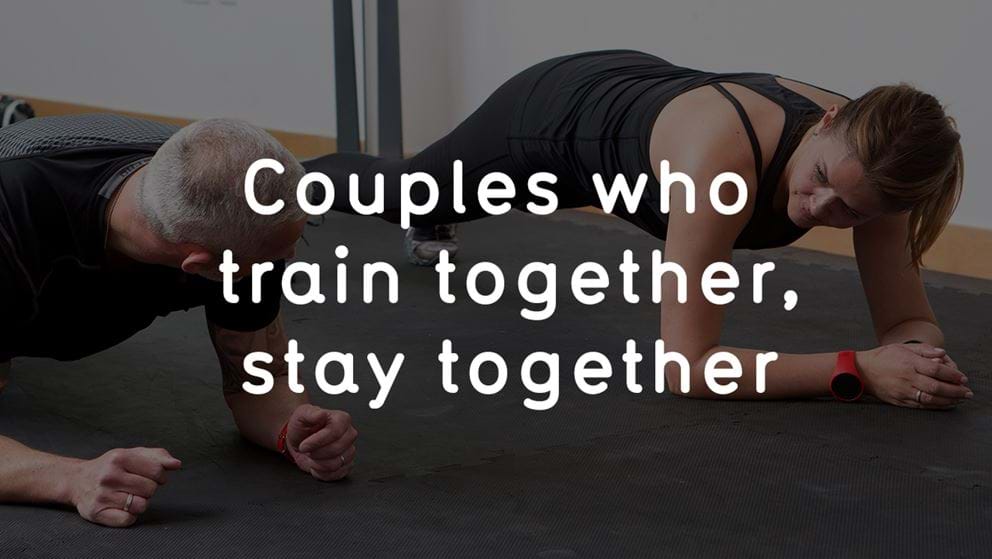 We all know that couple who swear by working out together. While many of us may cringe at the thought of sharing and swapping the barbell with our significant other- it turns out that there may well be some science behind the ‘train together’ phenomenon after all.

We teamed up with the Sports Science Agency in a bid to discover how training with a partner, as opposed to training alone, affects gym performance. We also wanted to delve deeper and see what - if any - affect this workout time spent together was having on relationships. And the results were clear.

Across almost every exercise type, couples performed better when their partner was by their side. This was due to both encouragement and competition- with us observing the powerful influence both had across a range of activities and apparatus.

What’s more, when we conducted a survey of over 2000 couples, a clear majority said they believed their relationship had lasted longer as a direct result of hitting the gym together, with men particularly likely to say it had made the relationship stronger.

We selected three couples to take part in our investigation.

We collaborated with the Sports Science Agency to come up with the ultimate test of determination and performance that would put our couples through their paces. On the first day of our experiment, the couples arrived together but were separated. Once we’d got them measured up through body composition analysis, we tested them on the following:

While doing these, we measured the following:

For the other gym tests – reps/seconds achieved, average heart rate and rate of perceived intensity

While carrying these exercises out, our participants received no encouragement whatsoever from the team. We then asked the couples to return a week later. They repeated the exact same process as before, except this time they worked through the experiment together. They could compete beside each other (plank), spot or provide vocal encouragement from the sidelines.

We recorded our measurements and compared them with the previous week to understand what effect working out as a couple had had on our participants.

In all but Tommy’s plank, this couple improved in every measure when they trained together – compared with when they were apart. One particular standout was Clare’s plank, for which she recorded an 83% increase when her partner was by her side to encourage her. This also had a clear and positive effect on her cycling – travelling 57% further across a set timeframe.

Tommy’s gains were much more modest. Having his girlfriend with him to spur him on had little effect on the bench press, some effect when on the bike, and a decent effect on his leg press where his score was up 20%. This may well be down to the fact his partner set him an ambitious target before he started.

Impressively, this couple recorded better and higher scores on every test when they worked out together.

Heart rate data suggests the two of them worked much harder on the bike when they had their partner’s encouragement, and it showed – with both managing to cover more distance over the 20-minute timeframe. Interestingly, Kim’s rating of perceived exertion was lower even though she put more in – suggesting that her husband’s presence may have served as a welcome distraction.

The most impressive increase for Craig was during the leg press, scoring 50% higher when he had his wife with him the second time around. She set him a goal, so this acted as a major form of encouragement. Meanwhile, Kim’s plank saw a 60% improvement, probably the result of some healthy competition.

This couple kept up the emerging trend of better performance when working together. This wasn’t universal though; Simon’s bench press and Gill’s cycle recorded slight decreases, but there were still clear and obvious gains to be noticed. As they’re both avid cyclists, they recorded a similar distance on the bike across both the solo and shared sessions.

Where this couple were able to directly assist and vocally support each other, they recorded some hefty increases. Gill’s bench press saw a 60% higher score the second time around, and Simon’s leg press saw a 33% rise thanks to his girlfriend’s encouragement. Competition was definitely on show when it came to the plank, spurring both on to beat their original scores.

In the clear majority of activities and exercises we studied, our three couples showed a tendency to perform better when they’re by each other’s side. Women in particular posted some really encouraging results – and a healthy mixture of support and competition spurred all of them to smash their goals.

What working out together really means for your relationship

Of course, there’s more to hitting them gym together than pushing your personal records and performing well.

To find out exactly how working out together effects relationships, we surveyed over 2000 British adults asking what shared gym time really means to them. And the results were stark.

Our survey found that a sizeable 40% of couples exercise together at least once a week. Around six in every ten respondents said their relationship had lasted longer because they work out together. Men were slightly more likely to hold this view than women, but a majority of women expressed it nonetheless. An even more impressive 69% of people said training together had made their relationship stronger – with a whopping 74% of men agreeing.

When we delved a little deeper into what it is people seem to love about working out with a partner we got some telling answers. 48% of people said they felt better for hitting the gym with their significant other, compared with going it alone. 45% of women said it encouraged them to exercise for longer, and two in every five said it made them train harder. And it might just be sparking passion in other areas too; over a third of respondents said shared gym time made them more physically attracted to their partner.

So it seems the answer is clear. The numbers show that sharing your workouts with a partner will boost your performance; and leave you both feeling happier, closer and stronger a match as a result. Couples who train together stay together. So what are you waiting for?