Five easy lunchbox swaps to get you eating healthy 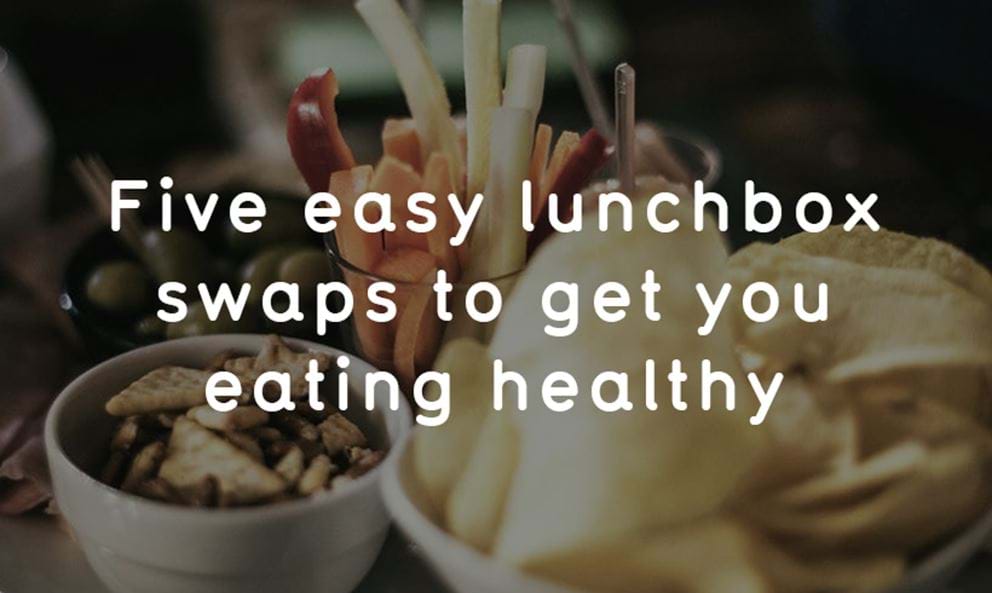 Getting started with healthy eating doesn’t have to be a chore.

Often, the best changes are the small ones you manage to stick to, not the big ones which you’re tempted to abandon after a week.

Keeping that in mind, here are five easy lunchbox swaps to get you on the path to healthy eating.

Crisps may be delicious, but they’re usually pretty bad for you.

Most store-bought crisps are drenched in killer trans fats in the form of hydrogenated vegetable oils. Trans fats are a big deal – studies have linked them with coronary heart disease.[1]

Along with the trans fats, store-bought crisps are also likely to be high in sodium, along with various potentially dodgy flavourings and preservatives.

Mix things up by making your own batch of baked crisps instead.

The process is as simple as cutting potatoes into thin strips, putting them on a baking tray, sprinkling them with olive oil and your favourite seasonings, and popping them in the oven until they’re crispy.

Unlike hydrogenated oils, olive oil is known to have many health benefits. One of its core components – oleic acid – has possible anti-cancer properties, for one thing.[2]

With homemade baked crisps, your food will be less oily overall, and you’ll also have direct control over the levels of salt.

Replace your biscuits with rice cakes (and spread)

Biscuits probably seem like a pretty innocent snack on the surface. Don’t be fooled.

Most biscuits contain low-fibre refined flour, meaning they can play havoc on your digestive system and trigger constipation.

Good gut health is a key part of good overall health, so anything that disrupts that is trouble.

With the high gluten content of many biscuits, sufferers of celiac disease and gluten sensitivity can be in for an even worse time, with IBS or leaky gut syndrome being the result.

Switch your biscuits for rice cakes instead.

As well as being low calorie, rice cakes tend to have a good fibre balance, and are rich in essential nutrients such as iron. Combine with a healthy spread for extra flavour and calories, as needed.

There’s just no getting around it, chocolate bars are, pound-for-pound, one of the unhealthiest snacks around.

A key reason for this is the high levels of high fructose corn syrup (HFCS) found in most chocolate bars. HFCS is a true killer, linked to just about every modern medical epidemic from obesity[3] to cancer[4], fatty liver[5] and more.

Switch out the chocolate for fruit salad next time you get a craving for something sweet.

Preparing a fruit salad is as simple as slicing up your favourite fruits, mixing them together and putting them in a container for later.

While fruit contains fructose, studies have found that it doesn’t cause the negative health effects associated with processed fructose. In fact, studies have correlated fruit consumption with increased health across the board.[6]

On top of that, you’ll get a good dose of fibre, and plenty if vitamins and minerals.

Replace your sandwich with a sourdough sandwich

Sandwiches are great. They’re quick to prepare, nutritious, and you can fill them with all your favourite spreads and extras.

The issue is that most bread you’ll find at the shop isn’t sourdough.

Contrary to popular belief, sourdough bread isn’t just an artisanal “style” of bread; it’s the traditional method of breadmaking used by people across the world until the industrialised food industry took over.

Sourdough bread undergoes a fermentation process which can reduce up to 90% of these phytates[7], making the bread much easier to digest, and freeing up valuable nutrients which you otherwise wouldn’t be able to absorb.

Soft drinks are a nightmare for the same reasons as many other processed foods. For one thing, they’re almost always chock-full of the high fructose corn syrup we mentioned earlier.

With studies showing a clear correlation between soft drink consumption and the obesity epidemic, it’s a pretty good idea to avoid the stuff as a rule.

Instead, switch things up with some homemade iced tea. Just choose your favourite tea, brew it, let it cool to room temperature, then add ice cubes and put in the fridge.

Go for unsweetened if possible, or else add a bit of honey when it’s still hot, if your sweet tooth demands it.