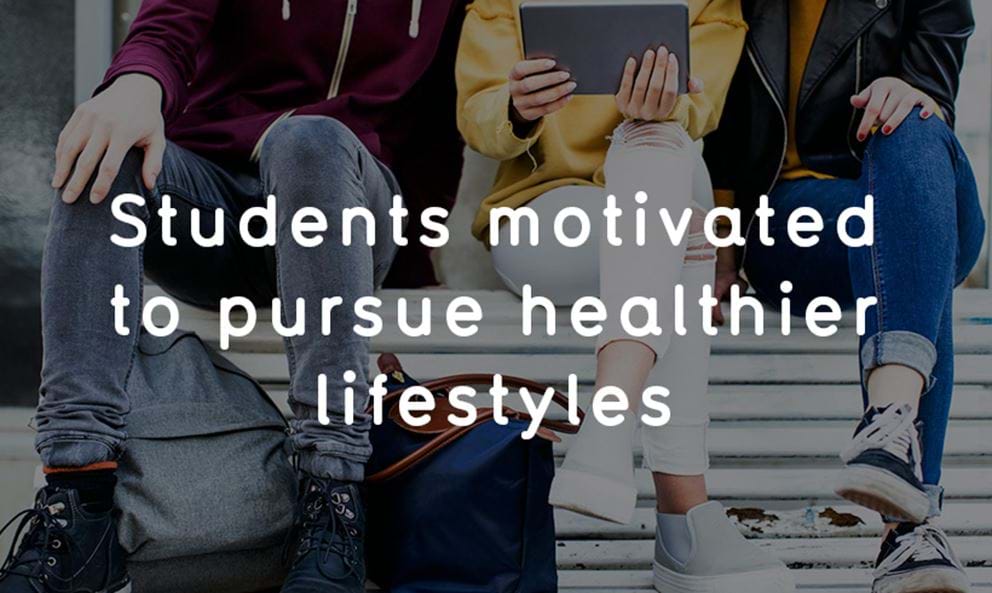 At university? You may want to reconsider your everyday habits.

Partying, junk food, and newfound freedoms can often see healthy eating and exercise pushed to the back of students’ minds. The popular term of the ‘Fresher’s Five’ will likely be on many new students’ minds, referring to the weight gained by some students (supposedly five kilos) in their first year of studying.

A recent survey of 1000 UK students showed that 45% gained weight during their first year at university. While many students want to lead a healthy and active lifestyle, the temptations are often hard to resist.  Whether it’s from excess drinking, consuming too much junk food, stress or failing to plan healthy meals, over 70% of students who gained weight considered themselves to be overweight. More often than not, students are just unaware of how many calories are in their food and easily go past their recommended daily allowance.

With easy meals like Chinese takeaways or a burger and chips racking up the calories, it’s easy to see why unhealthy eating is widely considered a contributing factor. In certain areas of the UK, over three quarters of the surveyed students considered this to be the culprit behind their weight gain. Northern Ireland in particular cited it as the main cause, with over 90% of students blaming an excess of junk food for their weight increase.

The fun, party lifestyle of the typical new student is also a massive contributor, and 47% of people across the UK suggested alcohol consumption to be their number one reason for piling on the pounds. It’s no surprise either with that cool lunch time pint containing around 250 calories and a single Jager bomb on a night out coming in at 150.

Often, students don’t realise how many calories these consumer-friendly meals and tempting alcoholic beverages contain. Our survey revealed that around 80% of students drastically underestimated the amount of calories in a pizza, and only 222 people guessed anywhere in the region of its actual number. With the average large pizza containing around 2000 calories, consuming the entire thing would in actual fact count as 85% of a man’s daily calories and all of a woman’s. Excessive calorie intakes above your daily recommendation need to be counteracted with exercise, and this can often be hefty as illustrated in our infographic below.

Weight gain isn’t all about unhealthy eating and drinking habits though. Everyone falls victim to a lack of motivation every once in a while- we can’t all be super humans, after all. Unsurprisingly these factors influenced 40% of student’s weight gain, with 10% saying their lack of a gym membership definitely contributed towards this. Taking advantage of a range of classes and machinery at a gym may be the best way to keep yourself motivated to exercise however, most students probably feel the cost of a monthly membership is unaffordable or simply just not a priority. It is therefore not a surprise that the most students who had no gym membership were from our more expensive capital city.

Could It Be Something Else?

High calorie eating and a lack of physical activity are the obvious contributing factors towards weight gain but according to our survey, stress from deadlines and exams accounted for over a third too. When you’re feeling down or under pressure, it’s understandably easy to try to counteract it by comfort eating or pressing pause on your exercise routine. The North West came out top for stress related weight gain in our survey with just over half of students from this area claiming stress contributed towards it.

How Can Students Keep Healthy?

Despite these figures, it’s reassuring to see that 87% of students surveyed were keen to take action against their weight gain, whether through exercise, dieting or changing their unhealthy habits. To keep those pounds off, we recommend students keep aware of their alcohol and junk food intake as well as spending time to plan healthy meals for the week. This will not only help them keep track of what they are eating but will also keep their bank balances healthier too. That’s not to say that we shouldn’t all indulge in a treat every once in a while. Limiting drinking to a couple of times a week and seeing takeaways as a one-off instead of a typical meal are good rules to stick by in order to ensure you stay healthy.

Maintaining an exercise regime is also essential in order to counterbalance the student lifestyle and all those hours sat immobile at a desk studying. Joining a sports team was the preferred option of around 7% of overweight UK students, with Brighton having the highest amount of aspiring sportsmen and women. Similarly, over a third of our surveyed students opted to take advantage of a nearby gym or go for a run. 40% opted to exercise at home or go running outdoors.

Simple ways to stay fit such as walking or cycling to class instead of taking public transport or eating at regular times are also beneficial, and just over a fifth of students intended on doing this following weight gain. A combination of all these beneficial lifestyle changes could be very effective in altering a student’s overall health, ultimately avoiding that ‘Fresher’s Five’ weight gain.

Treating yourself to the occasional takeaway or tipple is a normal part of student life - but do you really know how many calories are in them? From those late night cheesy chips to a cool pint after lectures, the calories can quickly add up, and in some cases nearly exceed your daily calorie recommendation. Many students are oblivious to just how easy it is to gain extra kilos during their time at university. Take a look below at just how much exercise you’d have to do to work off those student favourites:

You can still enjoy indulging in these foods and drinks every once in a while but remember to consume in moderation and stay active to remain healthy and happy.