What effect do painkillers have on muscle growth? 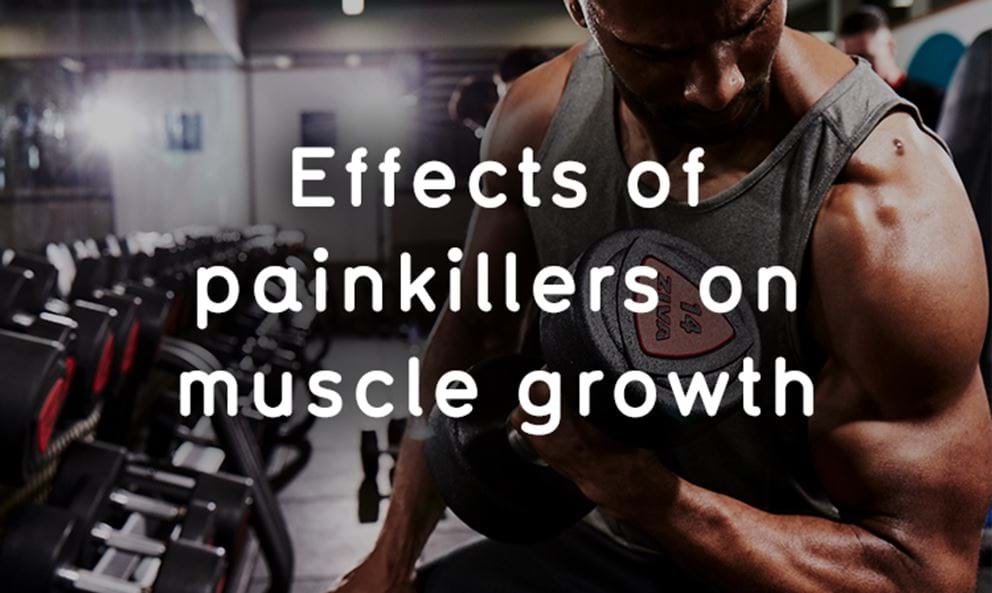 Pain and weight training go together like bread and butter, like fish and chips, like… well, you get the point. When you move heavy things in order to forge yourself a body fit for the gods (or goddesses) of Olympus, there is a price to pay. Every workout is a ritual of damaging your body’s tissue in a controlled way so that it can grow back stronger.

If you’re especially unlucky – or push yourself harder or faster than you’re ready for – that normal post-workout sting can metamorphose into the kind of inhuman agony that tells you the gods are displeased with your antics.

With pain being such an ever-present companion on your journey down the path of iron, there’s a temptation to reach for a few over-the-counter painkillers to take the edge off and get you through your next workout. Is that a good idea? Well, let’s find out.

Working out beats not working out

When asking whether painkillers are good or bad for your gym gains, the first thing to keep in mind is that regularly skipping workouts due to muscle soreness will slow down your gains. End of story.

Anything that allows you to overcome ordinary DOMS (delayed onset muscle soreness) and get back on track with your training regime will, in theory, be better for your gains than staying on the couch and feeling sorry for yourself.

This is where non-steroidal anti-inflammatory drugs (NSAIDs), like ibuprofen, often come into the picture. On the surface, everything looks positive. You get to shrug off some of the crippling pain you caught during your last squat session, and that in turn allows you to go to the gym and get your workout done without bursting into tears in a highly visible public place. As always, though, there’s more to the picture.

Unfortunately, drugs like ibuprofen are classified as COX (cyclooxygenase) inhibitors. The point to understand here is that COX activity is a crucial part of the muscle growth process. Anything which gets in the way of it has real potential to harm your gains.[1]

There have been various studies which have shown that painkillers can interfere with muscle gain; the only problem is correctly interpreting the results. One immediate problem is that many of those studies were done using rodent test subjects[2].

The next problem is that the studies which have been done on humans have turned up a few contradictory and confusing results, too.

One early human study, published in 2001 in the American Journal of Physiology, Endocrinology, and Metabolism, found evidence that painkillers harmed protein metabolism in the muscles. Other studies didn’t record the same effect[3], while some actually found that long-term use of NSAIDs (around 12 weeks) increased muscle mass and strength.[4]

So… what’s the truth? Hard to tell. The various human studies haven’t stuck to one clear methodology or subject type. Some studies focused on elderly test subjects suffering from osteoarthritis. All placed the emphasis on untrained individuals rather than hulking disciples of Schwarzenegger.

The best thing to do seems to be to err on the side of caution. Using NSAID painkillers once in a while probably won’t wreck your gains. Using them regularly? Best avoided.

Painkillers Can Keep You in Denial

Whether or not the drugs themselves help you to pack on muscle, or kill your progress before it has a chance to see the light, there is one trap you need to avoid: using painkillers to mask and ignore a more serious condition.

Normal delayed onset muscle soreness is primarily the result of the micro tears which occur in the muscles after training (not the result of lactic acid build-up as is sometimes claimed). It’s safe to train through an aching pair of quads or shoulders, providing you don’t drop anything heavy on yourself or collapse under a mountain of iron.

However if you’re experiencing a serious sharp pain in any of your joints – or in your muscles – which lasts for more than a couple of days, you need to take a break from training at the very least. If symptoms persist, you may need to book an appointment with your GP.

What you definitely must not do is tough it out by popping a few ibuprofen and trying to set a new personal record for the deadlift. Taking a week off training will be much better for your long-term strength goals than ignoring your body, getting injured, and being forced to take 6 months off instead.

Conclusion: Listen to your body and use painkillers sparingly

While there’s some pretty clear ambiguity about just how bad NSAID painkillers are for your long-term muscle gains, there’s enough evidence to suggest that knocking back pills before every workout is a bad idea which probably won’t help you become a human titan.

That’s not to mention the negative effects which prolonged NSAID use can have on your organs, including your gastrointestinal health.[5]

The rule of thumb should be that if you can get your gym session done without using painkillers, don’t touch them. However if you’ve got an unnaturally bad case of DOMS and you’re convinced it’s the only thing keeping you from pulling off a good workout, feel free to use painkillers in moderation. Above all else, listen to your body and don’t try to train through an actu