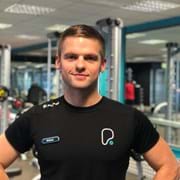 Welcome to PureGym. My name is Mike and I've been a Personal Trainer since 2012 following three years in the Military (Army R.E) and worked for PureGym Edinburgh West since November 2012.

I didn't have much knowledge or background in fitness prior to 2009 bar five-a-side football and an occasional charity run. I applied for the army in winter 2008 and started running and practising very basic callisthenics (press-ups, sit-ups and pull-ups). This is following having suffered a severe injury (lower back) during a 5-a-side football match. I was working in IKEA picking jobs at the time. The every day lifting tasks would end in severe pain and having to stop. Nobody should have to live like that.

Having had intense chiropractic care on the follow-up to basic training and during it was clear I would have to strengthen my whole body and work on the weak areas. My physiotherapist in phase 2 training said to me, 'The stronger everything is the longer it will take to break down'. You would not believe the power of inspiration from that single comment. That is when I started lifting weights for rehab. Deadlifts and pull-ups. That was my cure.

In my own Personal Training, I have practiced a vast variety of training approaches and modalities. Purely my opinion, but the best is that which enables an individual to be 'ready for anything'. To perform functional everyday tasks with ease. They can move freely and efficiently, run, skip, row, climb, swim, lift weights, the list goes on. I ran the full EMF IN 2016 with no running prior to the event in over a year. Not something I would recommend to anyone, it's purely for reference that in reality there isn't only one way to train for something, and you can always be ready for anything. Remember that. I have recently gained my Crossfit Level 1 Trainer (CF-L1) qualification, and have followed the practice for years.