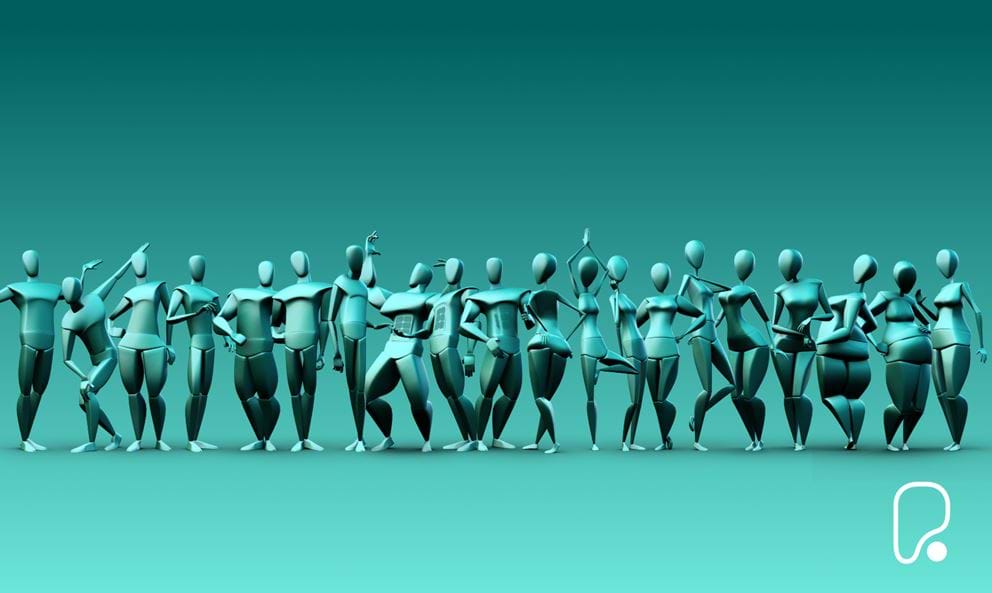 LOOKING BACK AT HISTORIC BODYSHAPES

We’ve always been fixated on body shape from the beginning of our history. Societies from thousands of years ago have always seemed to hold a particular body form to be the most desirable, for both men and women. But that body form hasn’t been a fixed size or standard, it’s been growing and shrinking and changing to match the influences of each time period.

From the ancient Greeks and Romans through to the medieval ages and modern times, the ideal body shape has changed and fluctuated to almost every possible dimension.

As we move into a new decade, we wanted to showcase the volume and variety of body shapes throughout history, to show that there is no one single perfect body shape!

Read more on how female body ideals has changed

Read more on how male body ideals has changed

Dr Amelia Serafine is a faculty member at the History Department of San Antonio College in Texas, and she specialises in the field of Cultural History.  She has shared some of the most interesting body shapes that have been put on a pedestal over the years, with reasons as to why particular body parts were celebrated for being big, small, wide or narrow.

She says: “There are many more examples of different body shapes being idolised from the 20th century than there are from ancient Rome, Renaissance and early-modern periods. The huge volume of different ‘perfect’ body shapes in the last 100 years makes the point that body ideals are now changing so rapidly that it’s impossible to keep up."

"In fact, body ideals throughout history were largely fantasy, though people went to extraordinary lengths to try and meet them. Especially since the 19th century, most of these body ideals were created to exclude, to make people doubt themselves. If history has anything to teach us about the ideal body shape, it’s that it will change tomorrow."

"Personally, I think that the “ideal” body is the one you’re living in. Treat it well, and enjoy its varying shapes and sizes – love it for being yours."

While it’s interesting to see how these body shapes have changed we agree with Dr Serafine and believe that the time of the ‘perfect’ body shape is now over, and that the main goal is simply good health and happiness with your figure.

“Wealthy ancient Roman women, had a long list of beauty ideals to check off: being slim but robust; high, round, youthful breasts; narrow shoulders; small waist; wide hips and thighs; long, hairless legs; rosy lips and cheeks. This look was not achievable by most, so ancient Roman women were fervent appliers of cosmetics and wrapped their waist to shrink it and bolster their breasts."

“Rather than celebrate the physical form like the Greeks and Romans, early Christians saw the body as weak and prone to sin. The medieval body was also prone to illness, including the Black Death. What was the ideal body in the Dark Ages then? Probably a body without signs of the plague! In the 15th century, French and Burgundian women wore a stuffed sack under clothing to look pregnant. In sparsely populated post-plague Europe, fertility was fashionable.”

“In the 17th century, artist Peter Paul Rubens created loving depictions of full-figured women, bringing us the phrase ‘Rubenesque” to depict soft, rounded, and voluptuous female bodies. He painted the French Queen Regent Marie de Medici this way, so we should understand that this full-figured look was very flattering. Though he smoothed out some age lines, he celebrated fat dimples and plumpness of stomachs, legs and arms.”

“For women, the early 19th century demanded a small waist, rounded shoulders, high breasts, and absurdly small hands and feet. Very few women met these standards, so they resorted to dresses with huge starched sleeves and corsets – complete with padded breasts and false buttocks to create an exaggerated and impossible hourglass figure.”

“The 1920’s flapper look fell away when the global depression struck, and buxom breasts re-emerged as a cultural comfort. For women, cinched waists, soft bodies and fuller, cone shaped breasts were in style, and new lingerie was marketed to meet this new task. The cone breasted look of the 1930s grew into the bullet-bra voluptuousness of the 1940s and for women, the ideal body shape was plumper “sweater girl” or pin-up girl.”

“In a prosperous post-war era, slim fashion models showcased a body ideal for women that was ultra-slender, with no waist definition and especially thin thighs, stomachs and arms. This androgynous and thinner look for both men and women was part of the counterculture movement which rejected the conformity of the 1950s. This sharp swing in ideals, from hourglass to string-bean, was especially difficult for women to keep up with and fuelled a massive growth in the diet industry.”

“This decadent decade demanded bodies stayed in shape. They were slim but not undernourished. Muscle tone, especially in arms and legs, was particularly important as it helped portray the energetic lifestyle image of the “working woman” of the 1980s. Aerobics was queen. It was as important to show off HOW you got that aerobics body, which made gym fashion (spandex, headbands, ankle-warmers, leggings) so popular in the 1980s.”

“For women in the 90s Kate Moss embodied an ultra-slender look known as ‘heroin chic.’ Even women who didn’t want to look as slim as the supermodels embraced the slender look. Short skirts were in style and long slender legs were in, along with angular bones and a defined jawline.”

“The ultimate early-2000s female body was all about appearing long and lean. Body conditioning workouts grew in popularity as they promised to ‘lengthen’ muscles without weight training. There was a lot of attention on flat, hard stomachs, and the elusive ‘thigh gap’ became idolised. Women especially hit the yoga mat, the Pilates machine, and the elliptical to try and achieve this look.”

“Women are working to emulate the ‘bootyliciousness’ look of reality TV stars and social media influencers. Women are squatting their way to a thick bottom, which has prompted an increase in popularity for heavy lifting in females, highlighting the positivity around strong women. But with crazes like the ‘belfie’ social media has created new pressures to conform to unreal body ideals. The perfect ‘skinny thick’ look is practically impossible to achieve for the majority of women. It demands large breasts, a tiny toned waist, large hips and a firm round butt with long slim legs.”

From narrow waists to barrel chests, sculptured pectorals or well defined calves, the Western body ideals of men show just as much variety as women throughout history. Again, as with female body shapes it’s important to remember that these ‘perfect’ body shapes were often inspirational but unachievable for the majority of society.

“On ancient temples of the Early Dynastic Period we can see the exercises undertaken by Egyptian men to achieve their ideal figure - long and lean with, a narrow waist but broad powerful shoulders. These depictions show Egyptian men using heavy sacks filled with sand to pull off an ancient “clean and jerk” as well as some moves that wouldn’t be out of place in a yoga studio – all helping create the perfect toned, but not overtly muscle-y Egyptian body.”

“Ancient Greek culture was obsessed with the male form. Classical Greek statues in the 5th and 4th centuries BC depict Athenian men as strong bearded warriors who had defeated the Persians. Men were praised for being tall and angular with thin waists, trim legs and locks of flowing hair. Heroes were depicted with very defined chest, abdominal and oblique muscles.”

“Elizabethan men’s chests were less emphasized in art and fashion, and instead it was all about legs! Manliness in this era meant intellectual power, and strong upper-body muscles belonged to the working poor. Men’s high-couture styles drew attention instead to shapely thighs and strong calves, with heeled shoes helping to showcase those fashionable leg muscles.”

“Being either too thin or too fat showed either weakness, or being prone to over-indulgence. Men wanted to be an average build, but on the slender side (due to the increase in middle class office jobs) and some men even resorted to corsets to achieve the cinched waist demanded by fashion. Hands were important too for men, and elegant long hands were favoured over the working man’s large rough hands.”

“In the early 20th century, middle-class men became interested in building muscle, long seen as a mark of the working class. Eugene Sandow, the father of modern bodybuilding, found his bulky thigh, bicep, triceps and neck muscles garnered great public interest. Sandow modelled himself on the ancient Greek male figure, and opened the Institute of Physical Culture in London in 1987.”

“Weightlifting for men fell out of fashion after the strong man era, but re-emerged in the robust 1950s. In 1948, the first Mr. Universe competition was held, and in the following decades men increasingly worked to bulk up as the ideal male figure’s barrel chest grew. The first televised Superman wore a padded suit to give him exaggerated chest muscles and new Hollywood stars like Rock Hudson and Tab Hunter showed off impressive physiques.”

“Interest in muscles continued to grow throughout the ‘60s and ‘70s for most men, but the slender androgyny of stars like David Bowie was a popular counterculture alternative. Hipsters preferred no muscle tone, slender chests and legs and trim abs – a body shape that made a marked difference to the muscular men of the 50s.”

“Bodybuilding exploded in the 1970s and 80s, creating celebrities like Arnold Schwarzenegger. With serious lifting (and sometimes the aid of doping) men got BIG in the weight room, and by the end of the 1980s an extreme upper body V-shape was in for men, showcasing bulging arms, a massive chest, visible trap and back muscles behind the neck and majorly defined abs and obliques.”

“Men’s bodies in the 1990s retreated from the massive muscles of the 1980s, but defined abs and the V-shaped torso remained. David Beckham in his 20s and Brad Pitt’s lean physique in the 1999 film Fight Club showcase the ideal men’s body of that decade – super toned with low body fat, and ready to start doing CrossFit in the 2000s.”

“Celebrity men playing super-heroes raised the stakes for men in the last decade. With famous ‘dad-bod’ types like Chris Pratt transforming to a jacked-bod seemingly overnight, the 2010s for men was all about building muscle while retaining definition. The barrel chest came back, with emphasis on bigger pecs. Defined obliques remained fashionable and legs needed to be big enough to look proportionate to the upper body.”

There’s no one size fits all body shape

Exercise has many aesthetic perks, but whatever body shape you strive for, there are other long-lasting benefits of working out such as improved mental health, wellbeing and overall quality of life.

Set yourself realistic goals in the gym and remember that improved overall health and fitness outweigh fitting into the next body shape craze.