Using the Gym to Train for Your Mud Run Challenge 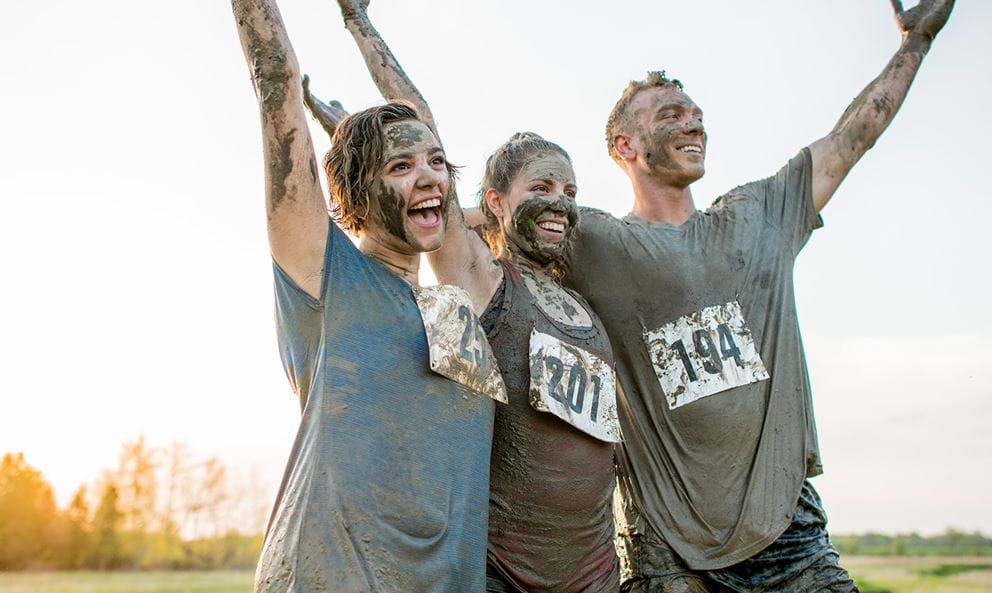 From Tough Mudder to Born Survivor and the Spartan Race, mud runs are more popular now than ever. Something about self-punishment and simulated boot camp torture just seems to strike a chord with a large number of fitness fanatics around the nation and, for that matter, the world.

If you’ve been bitten by the bug and feel convinced that crawling under barbed wire and running through a trap of dangling live wires is how you want to spend your weekend, more power to you.

The only issue with preparing for events such as these is that it’s difficult to replicate the race conditions in training. Luckily there are a few gym-based alternatives to the real thing that will help you to get in shape in time for challenge day.

Having to swing across a pool, moat, or similar pit of doom on a series of monkey bars or gymnastics rings is something that you’re bound to be confronted with during your mud run.

The keys to preparing for this kind of obstacle in the gym are: improving grip strength, getting used to alternating between one arm and the other during a hang, and strengthening the lats and biceps.

Doing standard pull-ups and using the lat pulldown machine will train the required muscles well, but your regimen isn’t complete until you add in alternating single-arm hangs on the pull-up bar. The way to perform this exercise is simple. Hang on to the pull-up bar with one arm, until you can barely hold on any longer. Then, without touching the ground, swing up and grab onto the bar with the other arm, and repeat. Continue this back and forth either for a set number of seconds or until failure.

Muscle-ups to prepare for climbing over tall obstacles

One of the great challenges in every mud run is having to climb over obstacles — often wooden walls — of different heights. Typically, some of these obstacles, usually near the beginning of the race, will be short enough that you can just about vault over them. Sooner or later, however, you’re going to come up against climbing obstacles where you’ll be lucky to get your fingers onto the ledge with a good run-up.

For all intents and purposes, there are only two ways to deal with this particular type of challenge; muscling your way up and over them, or having other people boost and pull you over.

Muscle-ups are the closest exercise you can do in the gym to replicate this “up-and-over” movement. These exercises are performed by hanging onto a pull-up bar (with thumbs over the top), performing a pull-up, and then “rolling” your chest over the bar, before pressing yourself up over the bar with your arms. This is a highly advanced move so don't sweat if you can't do this. Instead, work on practicing your pull ups and tricep dips.

All the obstacles involved in mud run races have one singular purpose; to exhaust the living daylights out of you. After a while spent running through slippery, muddy fields and forests, and then overcoming endurance-bending obstacles, you’re going to be exhausted. And it won’t be over yet.

Farmer’s walks are a fantastic exercise for conditioning you to keep going when utterly exhausted, as are kettlebell swings, although both exercises are quite different.

Farmer’s walks are performed by holding two heavy dumbbells, one in each hand, and walking back and forth until exhaustion causes you to stop. Kettlebell swings involve you activating the posterior chain and swinging a kettlebell out in front of you in a series of high-intensity reps.

At the end of each exercise, you can expect to be drenched in sweat and gasping for breath, with your muscles feeling like jelly. That’s the perfect sign that you’re training in a race-appropriate way.

You may be doing a mud run, but it’s still, well, a run. All the exotic obstacles aside, you run a real risk of being thwarted by the most mundane part of the race — the running itself — if you don’t do the appropriate, traditional cardio required to prepare.

What that means is that you’re going to have to log some time on the treadmill. Feel free to do some HIIT sessions, if you like, but focus primarily on moderate-intensity jogs of different durations. Your training should lead up to weekly ‘long runs’ of around the length of your race.

It may not the sexiest part of your training routine, but you’ll be happy you did your jogging when it comes time to run around for miles, while exhausted, on the day.