PureGym National Relay: Wellness for all 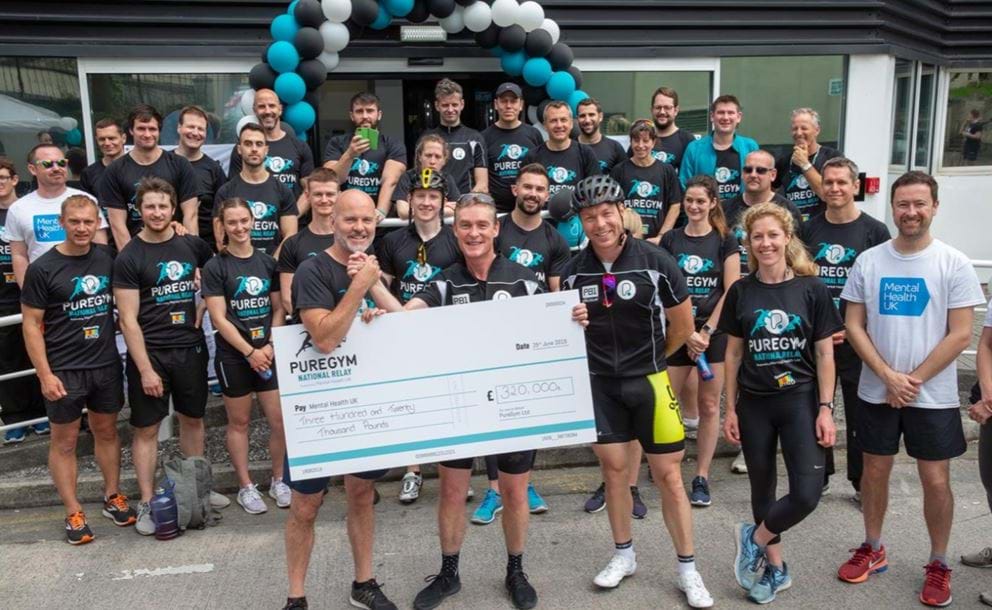 Through hard work and determination, we raised over £334,514 for Mental Health UK.

What was the PureGym National Relay?

Between 18 – 25 June, PureGym organised and took part in a staggering week-long relay starting in Aberdeen and ending in Plymouth, linking over 235 PureGyms across the UK.

Thanks to our members, colleagues and sponsors

Thank you to everyone who took part in the PureGym National Relay. From Aberdeen to Plymouth, the PureGym baton passed through hundreds of hands, each with a personal story of struggle and triumph.

For PureGym Cluster Manager (Glasgow Silverburn), Chris Davidson, the relay was an epic personal challenge, one he shared with his team. Chris says:

“I'll forever remember the date of the 18th June 2019 as the day I performed the hardest, yet most rewarding, physical feat in my lifetime to date.

When I look back, I had no apprehensions about the challenge because of the camaraderie my group showed from the start. Each person played their part flawlessly and remained positive throughout the journey, but genuinely enjoyed it, including the more challenging sections.

I feel privileged to have shared the experience with my team. You learn a lot about yourself when you step out of your comfort zone. I learned that it's not what YOU do that counts, but the people you do it with that makes the difference.”

Shaun Ellender, Cluster Manager and General Manager of PureGym Waterloo, describes his nervousness on the day:

“Let's be honest; mental health has either affected you or someone you know. It didn't take much persuading for me to rally my region and get London united on a Sunday morning to help this great cause (plus the sun helped).

Driving early on a Sunday morning to get to the start line, I had mixed emotions. I was excited for the end goal and anxious that I was accountable to receive and give the baton.

En route, the group WhatsApp was going crazy with pictures and messages from other gyms. This knocked the anxious feelings out of my belly, and I realised that months of planning had paid off.

Husbands, wives, sisters, friends, children, new staff and even dogs clapped their hands (and paws) in celebration of what we set out to do – raise money but most importantly raise awareness for a great charity.”

These are just two of the hundreds of stories shared throughout the event, with more celebrated every day.

Thank you also to Richard Clayton, Divisional Director of the North at PureGym and Annie Ross, from www.Exerk.com, who designed and directed the event together.

And, none of this could have happened without our generous sponsors: Kind bars, Lucozade, Jordan and Global Telesat Communications.

1 in 4 people in the UK is affected by mental health problems every year. And in the UK’s biggest survey, 74% of people said stress has made them feel overwhelmed and unable to cope.

Despite these statistics, there’s still a huge stigma around mental health. People feel embarrassed to talk about how they feel with friends and colleagues.

Mental Health UK provides practical information, advice and support to those living with mental health problems as well as their family and carers.

We partnered with Mental Health UK to highlight the positive impact exercise has on mental health and wellbeing.

Each stride we took in the relay is a step towards a healthier and happier society and improved mental health for all.

The work isn’t over – you can still donate

The relay has ended but will not stop striving to improve the lives of millions of people.

There is no health without mental health. You can still donate or catch up with the action on social media with the hashtag #PureGymNationalRelay and #ShareTheWeight.