Get your rice right: which is most nutritious? 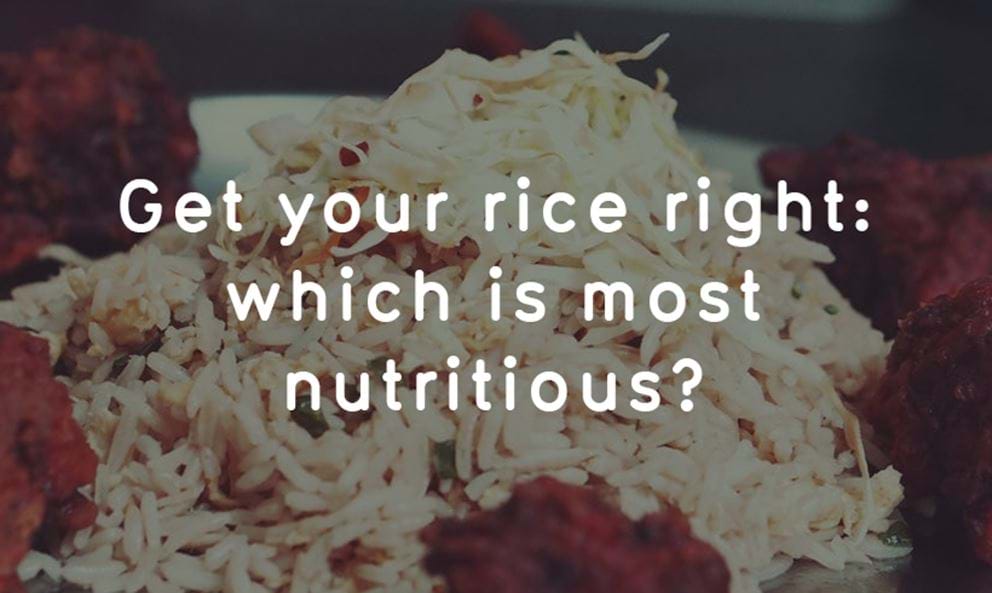 Ever noticed that there seems to be quite a lot going on in the rice aisle of your local supermarket? Maybe you’ve found yourself standing back for a moment and wondering just what the difference was between the various types on offer?

Well, we’re here to set your mind at ease.

Here’s a quick primer on what you need to know about some of the most common varieties.

“Brown rice” refers to whole grain rice, with the (indigestible) outer hull removed, and the nutrient-rich bran and germ remaining. Brown rice comes in many different forms, such as Jasmine and Basmati.

The key benefit of brown rice is the high nutrient content of the bran. This includes B Vitamins, magnesium, calcium, potassium and iron, among others.

Brown rice is also relatively slow-digesting, making it a good meal option for keeping you feeling full for longer.

White rice isn’t a strain of rice in the same way that black rice is. Instead, white rice is just “processed,” milled rice, where the bran, husk, and germ have been removed from the grain.

There are potential pros and cons to this. On the one hand, white rice is significantly lower in nutrients than brown rice, as most are contained in the bran. In fact, white rice is pretty much just pure starch.

On the other hand, though, it’s often argued – especially by paleo diet enthusiasts – that brown rice is a potential gut irritant and may result in digestive troubles, largely due to the phytates (“anti-nutrients”) found in the husk.

Since those elements have been stripped away in white rice, it’s an easily digestible source of glucose and starch, and can be used as a good workaround for people with digestive issues.

As it has a low fibre content, white rice is also fast digesting. Perfect for when you need to carb up in a hurry before a workout.

Like brown rice, black rice is whole-grain, though with a differently pigmented outer layer.

It has roughly the same nutritional benefits as brown rice – specifically high levels of B vitamins, iron, magnesium, and other minerals.

What really sets black rice apart, however, is its high anthocyanin content – the same antioxidant pigment found in blackberries – and a fantastic weapon in the fight against free radicals.

Turn to black rice when you feel like a light, healthy meal to take the edge off your hunger for longer.

The interesting thing about wild rice is that it’s not technically “rice” at all in the botanical sense, but a closely related family of plants historically eaten in North America and China.

Wild rice is typically sold and consumed in a whole grain form, and is rich in B vitamins, vitamin A, C, and E, as well as key minerals including calcium, iron, magnesium and zinc.

Wild rice is the perfect meal for fitness enthusiasts on a high protein diet, who want to get their muscles fuelled by something other than steak and eggs.